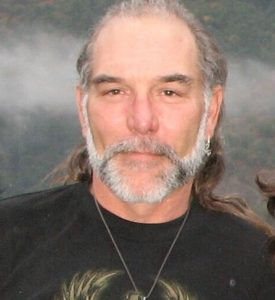 Music was Lawrence’s first love; his love for music was born through his grandmother Hazel who encouraged His fist solo performance at the young age of 7, while attending Margaret Harloe elementary school. Lawrence enjoyed writing music; manly rock and roll songs and even a few classical compositions. During the 80’s Lawrence was known locally as the “Guitar Monster” and he played at Reggae on the River in 2006 with Jade Steel.

His other love was cannabis. In 2010 he started Southern Humboldt Seed Collective and through testing found that he had high CBD in his genetics. “Sour Tsunami” was the beginning, then came Harle-Tsu, Canna-Tsu, Swiss-Tsu, and ACDC with some of these strains coming up all CBD dominant.

Lawrence Ringo was well loved and respected in the cannabis community for his generosity and dedication to organic sustainable agriculture; working with HuMMAP, Tea House Collective, and the newest CBD collective Lost Coast Botanicals to provide CBD medicine and support small farmers.

1971: Lawrence started growing and learning the traits of the plant early on as he started collecting pollen and making seed for the next year, thanks to a seasoned backyard grower.

1980: Lawrence started Light Deprivation by accident and was thankful for his new found knowledge. Light deprivation is when you cut the light back on a plant and fake it out so it thinks that it’s time to flower and starts to, you have to cover the green house and block all sun light.

1982: Lawrence had light deprivation figured out, he used it for early sexing so he could plant females in early May insuring huge plants that finished earlier. Then using the left over plants for light dep he could insure fresh medicine for the summer.

1980-1989: Lawrence purchased 40 acres in Blocksburg to further his skills in growing/breeding. Lawrence established seed stock and worked with all the original land race strains from Mexico, Thailand, Afghanistan, etc and made all the F-1 crosses while acclimating them for ultimate growing traits that would insure highest THC results.

1989-1996: Lawrence found a job at “Seagate Technologies” and raised his 3 boys in Santa Cruz County. All while growing gorilla style in the Santa Cruz Mountains by Boulder Creek and in Scotts Valley.

1996-2001: Lawrence transferred with Seagate to their newly purchased company in Longmont Colorado to Build 540.000 sq ft R&D facility on 40 acres.

2002-2009: Lawrence moved back to Blocksburg, CA. With a few strains that some old friends gave him I Lawrence started breeding for the next season. While searching online he found Marc Emery’s Seed Company and obtained 8 strains over a 2 year period and developed 20 new strains.

2009-2010: Lawrence started the collective “Kush Seeds” to distribute seeds because the demand was high and he already had a loyal local following. Also Lawrence was tired of getting poor genetics by the other seed companies that sprung up after Marc Emery was taken down by the DEA.

2010: Lawrence closed down Kush Seeds and started Southern Humboldt Seed Collective. After watching the video “Run From The Cure”, Lawrence made his first batch of Cannabis oil.

2010: Lawrence had his first tests done and found out that he had a strain high in CBD’s. “Sour Tsunami” After realizing about the medical worth of Cannabidiol, he started focusing his breeding for CBDs.

2011-2014: Lawrence fine tuned his genetics and his collective by networking with some of the most knowledgeable and respected individuals in the cannabis industry. All while training his 3 boys how to sustainably grow and continue breeding the strains that he had been passionately breeding for many Years.